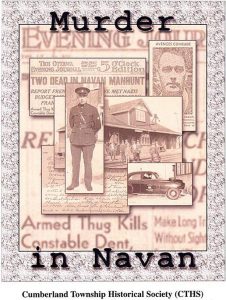 France had fallen to the Germans, and now Hitler had his sights set on England. Spies and saboteurs were a threat to all Commonwealth countries including Canada where people in cities, towns and villages were on high alert for strangers. So it’s not surprising that suspicions were raised in Navan, Ontario on the morning of June 20th when “a stranger with a German accent” who “may have been carrying a concealed weapon” asked a local farmer for directions to the nearest railway station. Before noon that day, a local Ontario Provincial Police Constable lay dead on the floor of the station, and the stranger, after a brief chase through nearby fields, was killed by police intent on avenging the death of one of their own. “Murder in Navan” recounts the events surrounding the murder of OPP Constable Harold (‘Hal’) Dent by “foreign thug” John Miki on Thursday, June 20th, 1940 at the Navan train station.

It has 54 pages, the cost is $10.00 + postage, available at historicalcumberland@gmail.com.